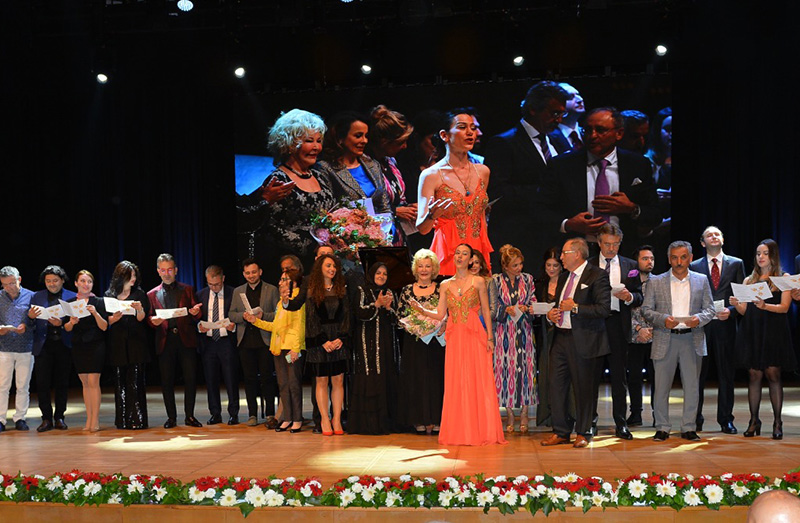 https://www.haberturk.com/kenan-yavuz-etnografiya-muzesi-silletto-odulu-nu-kutladi-3447392Kenan Yavuz Ethnography Museum, which was established in Bayburt by the Kenan Yavuz Culture Foundation in order to transfer the lifestyle, local traditions and cultural texture of Anatolian civilizations to future generations, was deemed worthy of the ‘2021 European Museum of the Year Silletto Award’ by the European Museum Forum. Thereupon, a celebration was held at Harbiye Cemal Reşit Rey Concert Hall. The founder of the museum, Kenan Yavuz, who made a statement before the event, said that the most beautiful of all his works is the museum he founded in his village. Kenan Yavuz, the founder of the museum, businessman Kenan Yavuz Bayburt Providing information about the museum operating in Beşpınar Village of Demirözü district, Yavuz stated that the museum, which was built on an area of 15 thousand square meters where he was born and grew up, consists of 26 different places.Regarding the structure of the museum, Yavuz said, “Every material of the museum, which we built with wood and stones collected from the destroyed and destroyed houses in the villages, lives its second life.”

Pointing out that the museum is also a structure that has established the relationship between time and space, Kenan Yavuz said, “We keep the culture of Anatolia and the beauties of Anatolia alive there, not only with objects, but also as an intangible cultural heritage.”

“IT IS NOT POSSIBLE TO MAKE CULTURE VISIBLE WITHOUT SPACE”

Expressing that the visitors had the opportunity to experience this culture in the museum, Yavuz said:

“We bake bread in the tandoor, boil bulgur in cauldrons, mow with scythes in the fields and grind wheat in the threshing floor. In other words, we strive to keep alive the social life, culture, tradition of being together, chatting together, family ties and family culture of Anatolia that existed 100 years ago and to teach it to our youth. Because without space, it is not possible for us to make our cultural depth visible and carry it to the future.”

Pointing out that the museum draws attention to various social problems and that it is a village museum that tries to protect both tangible and intangible cultural heritage, Kenan Yavuz said, “Without Anatolian culture, the future of humanity is dark. In other words, humanity needs the light of Anatolia. I think that the Turkish-Islamic civilization will once again be a means of salvation for mankind and that we should go there. Last year, we hosted 30 thousand visitors in just three months. That’s an extraordinarily large figure for a village museum. We expect nearly 100,000 visitors this year,” he said.

“WE GOT GREAT ATTENTION FROM ABROAD”

Stating that the museum was deemed worthy of the 2021 Silletto Award in the ‘European Museum of the Year Awards’ competition held every year by the European Museum Forum, and that they wanted to celebrate this award with a program, Yavuz said, “We have a large number of guests coming from abroad to the program. We also see great interest from abroad. We receive cooperation and conference offers from numerous museums. We attended the European Museum Forum Summit held in Estonia and explained ourselves in two special sessions. We are very proud and happy in this sense.”

During the night, the concert of the state artist Gülsin Onay and opera singer Burcu Soysev, entitled Journey to the Roots, the talk of the Turkologist Ali Canip Olgunlu’s Words from Dedem Korkut, and the song What is Love, sung by the Istanbul Opera Ensemble, were presented to the audience.

The program, which was awarded to Kenan Yavuz by TÜRSAB for his contributions to Turkish tourism, ended with the museum’s team and artists taking the stage together and singing the Bayburt folk song called Beautiful Vasfeyleyim Hallerin Seni.